New neighbours tied up outside Elinca the last few days were Alan (from France) and Erin (from Norway). The couple, a scientist and a sailor, met in Svalbard and combined a love of Arctic Research with a love of spending lots of time on a boat stuck in the ice. This year, delays have made them too late to get to the west coast of Greenland before the ice closed in and so they were heading for the east coast which, with some luck, will still be ice free. Their plan: to buy some dogs (to keep a good polar bear watch) and spend 6 months living aboard their aluminium yacht ‘Argelvor’ pictured below whilst taking scientific samples. They told us they have a -80 freezer onboard for their samples, a sled for getting around and gun for hunting seals (to feed the dogs).

Argelvor has a website at www.argelvor.com and you can follow their long winter in the ice via their blog. So far everyone who ties up next to Elinca seems to be off on an adventure equally as amazing as our and so we are gathering a whole list of blogs we need to follow! 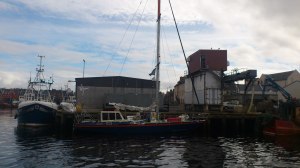 Argelvor collecting fuel before following Elinca out of Stornoway… next stop Faroes then Greenland!

This entry was posted in Uncategorized. Bookmark the permalink.